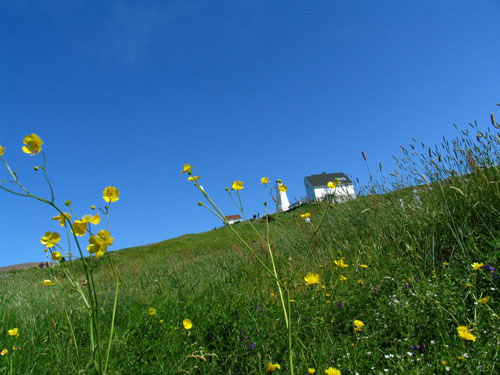 A lighthouse has operated at Cape Spear since September 1836. This scene is deceiving because the area around is very rocky and a steep drop into the ocean. The original Cape Spear lighthouse was the second lighthouse built in Newfoundland; the first was built in 1810 at Fort Amherst, at the entrance to St. John’s Harbour. In 1941 our Canadian military manned an artillery base here to protect St. John’s harbour. U-boats actually did approach this area but no action took place.

Doreen and I made our first visit to Newfoundland in 2008 and although this location was a great spot to see the whales, it was very windy and cool. St. John’s is the capital city and has much to offer in the way of activities, sites and history.

As we all do our best to adapt to the new normal, BPimaging would like to assure our customers that we are here and ready to serve your photography and marketing needs. You are welcome to attend your photo shoot or you can utilize our remote photo sessions without leaving the comfort of your home! If you choose to attend we have protocols in place to ensure the safety of our customers and staff.