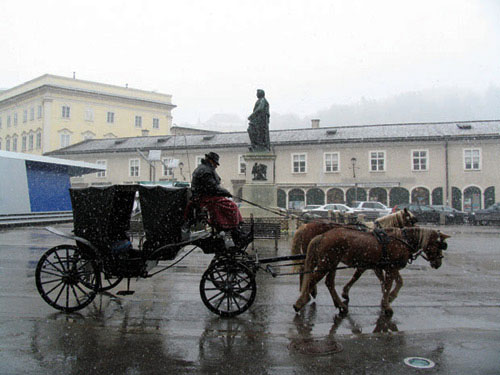 We visited Salzburg, Austria after a beautiful October week in Switzerland. We were just leaving the Art Museum as the snow was falling and a tour buggy galloped by. Almost instantly I made this shot with the statue of Wolfgang Amadeus Mozart in the background. Mozart was born in Salzburg, capital of the Archbishopric of Salzburg, a former ecclesiastical principality in what is now Austria, then part of the Holy Roman Empire of the German Nation. He composed over 600 works, many acknowledged as pinnacles of symphonic, concertante, chamber, operatic, and choral music. He is among the most enduringly popular of classical composers, and his influence on subsequent Western art music is profound.