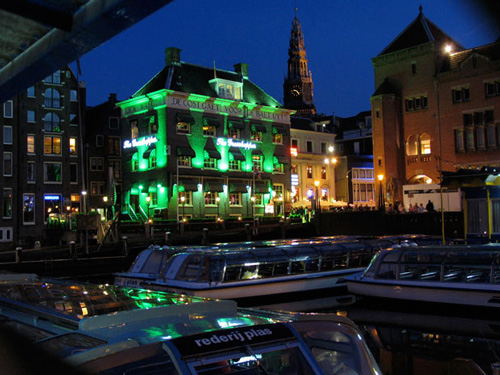 This pretty harbour scene in Downtown Amsterdam is a meeting point for canal tours throughout the city. It’s also near the main railway station. Whenever I (Tom) photograph an evening scene it must be at the right time in order to catch some of the sky, otherwise the depth disappears.

In the right rear of this photo (not seen), is the famous Amsterdam Red Light District. You can book a tour and see the ‘sights’. We walked through in daylight and there were ‘sights’ as well. According to the Oxford English Dictionary, the earliest known appearance of the term “Red Light District” in print is in an 1894 article from The Sandusky Register, a newspaper in Sandusky, Ohio. Author Paul Wellman suggests that this and other terms associated with the American Old West originated in Dodge City, Kansas, home to a well-known prostitution district during the 19th century, which included the Red Light House Saloon.

Illustrative Photography and What It’s All About
May 15, 2019
Search
Recent Posts
Categories
Go to Top