It may seem unusual for a photographer to promote another photographer, but this has a special meaning because I have admired his work for more than 50 years. I have known of George Hunter and listened to his lectures but only met 8 years ago. Since then I have travelled to Europe on several memorable photographic trips and joined with him as he has donated his archives to various galleries and archives in Canada.

Press photography was in the transition era between flash powder and flash bulbs. …I rigged up my Korelle with a rudimentary flashgun. With tinfoil wound around the finger release button to make contact and a table lamp reflector mounted onto a flashlight to utilize No. 5 flash bulbs.

In keeping with Irving Penn‟s edict in that folks are more interested in where you came from than where you are at, I will recall some early happenings and photographic endeavours. 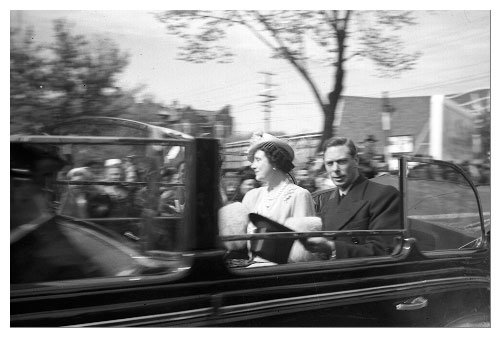 (1939) King George VI and Queen Elizabeth, paid a visit to Canada. During the processions through Winnipeg on the 24th of May, I was at the curb on Broadway Avenue and made a close-in shot of the couple in their carriage as they passed by. Eaton‟s, Winnipeg‟s largest department store, sold small prints of this photograph. From the royalties received, I was able to upgrade my Voigtlander Bessa to a Korelle Reflex II, a single lens medium format (2 1/4″ square, or 6cm x 6cm) camera, the predecessor to the Hasselblad that came along some twenty years later.

I had become interested in industrial activity through listening to a weekly radio program on my crystal set called “Night Shift” and so with our cousins from Toronto, we visited industrial plants such as Wrigleys, Canada Starch, Goodyear and Tip Top Tailors. I believe the tours and the radio programs were a big influence in my specializing in industrial photography assignments years later. 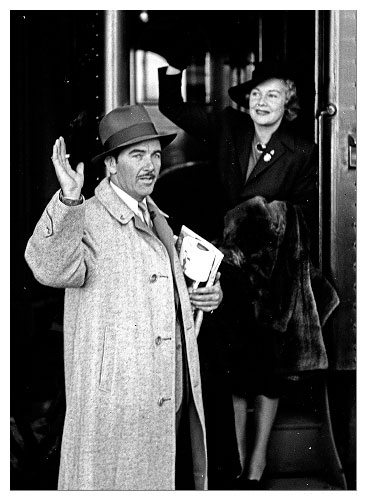 When the most famous Hollywood film stars of the day, James Stewart and Madeleine Carol, were in town, I got up enough nerve to run down to the Fort Garry Hotel where they were staying. I waited around the lobby to catch a shot of the pair as they were leaving the hotel. In the crowded lobby I only managed to grab an individual shot of each. I heard that the stars were working on a film featuring the RCMP and were proceeding to Banff. While most of the crowd rushed over to the CN Station, a block away, I tore a mile down Main Street to the CP Station as I knew Banff was on the CP line. I managed a shot of the couple boarding the train. With the Mickey Mouse flash setup, I had to shoot at a fifth of a second to ensure the flash bulb would synchronize. While the individual „portraits‟ were on the fuzzy side, I surprised myself with the station shot being fairly sharp. Happy with the shots turning out at all, I decided I would like to become a press photographer one day.

On Christmas and summer holidays in my latter school years I had diverse part-time jobs to earn money to buy film and equipment. They included repairing those old black desk sets at Manitoba Telephones, breaking heads off hogs at Canada Packers and selling women‟s shoes at the Timothy Eaton store. Everyone from Winnipeg worked at Eaton‟s at one time. 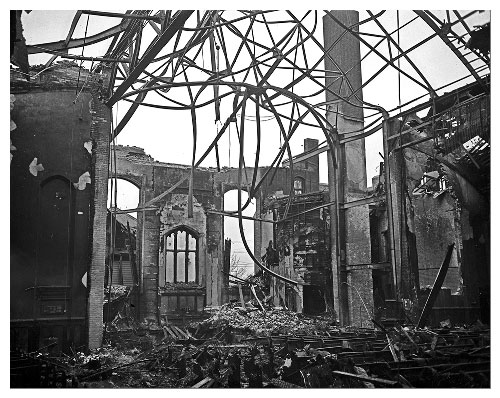 The night editor screamed, “St, Mathews Church is burning down! Get over there right away!” Smart-ass George replied, “The church is brick. It can’t burn down. Call Bruce.” After another call, I rang Bruce. We decided we should both go. Hell, at 2:30 we arrived to find one of the biggest fires Winnipeg has ever seen.

Then there was John Diefenbaker. I’ll always remember him placing his hand flat on top of my head and saying, “Son, mark my words, I’ll be Prime Minister of this great country when this great country celebrates its 100th anniversary in 1967. Son, mark my words”. I especially enjoyed photographing another celebrity, the Hon. Tommy Douglas, also from Saskatchewan. He impressed me as being a super person and made me appreciate all the more being from his province.

It wasn’t long before I learned of the unwritten newspaper edict, “If you don’ t come back with the picture the editor requested, don’t bother to come back at all. Save the embarrassment”. I can add another edict, and that is from personal experience. It goes like this: “If you want to get smart and make a shot that is not as requested, make the requested shot first and then get smart”.

This is how I learned the lesson. The sports editor, Vince Lea, gave me an assignment to photograph Mayor Garnet Coulter making the first pitch of the season at the ballpark at my alma matter, United College. What a dull picture that would make, I thought. My reluctance heightened when mother had an excellent dinner on the table that evening and I stayed for a second helping. I missed the opening pitch, of course, but figured I could make a shot of something more interesting.

As it turned out, I didn’t even go into the ballpark to make my shot. When I was parking the car, I noticed two kids climbing a pole across the street from the high fence surrounding the field. I jumped out just in time to catch the second lad sliding down a wire into the bleachers. When I placed a print on Vince’s desk next morning, he loved it and marked it up for four columns. That layout didn’t last very long. The city editor, in passing by the sports desk, noticed the shot and was told Hunter made it the previous evening at the stadium. Having nothing for his page, the front of the second section, he seconded it. It didn’t last long in that layout either. Later in the morning the news editor saw it and grabbed it for his front page. Was everyone happy about this shot? No way. Sports editor Vince was sore as hell. He didn’t have anything for his page. 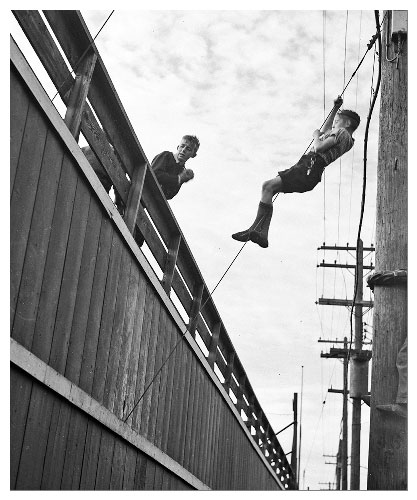 I hate to wind up on a morbid note. Don’t read any further if murder is a poor subject for you. It concerns twice-convicted murderer, Albert Westgate. One morning the city editor called reporter Jimmy Anderson and me to his desk and said, “There’s been a murder down the street at the Marlborough Hotel. Run down and make a shot of the room”.

We didn’t hear till later that Bruce and another reporter were kicked out of the hotel earlier and sternly warned not to return. Jimmy and I thought it over and decided we must be as inconspicuous as possible and not look like newsmen. We rushed to our homes and changed to suits and overcoats to look more like detectives. I picked up my smaller camera, the Super Ikonta B with flashgun and extension, placing it all in one of my father’s leather sample cases.

We walked into the hotel looking like we owned the place. We walked straight to the elevators, not looking right or left. The elevators had operators in those days and we said rather sternly, “The floor please,” not knowing which floor the room was on. Arriving at the floor we saw a maid’s cart at a doorway and calling the maid, we said, “The room please”. We entered, locked the door, and found a badly disarranged room. We assembled the camera gear, made a few shots and got out as quickly as we could. When the paper came out that afternoon there was no picture of the room.

Asking the editor the next morning what happened, he told us the paper’s lawyers said that if one of the photographs had been published, the paper could have been sued for trespassing. Had we been caught in the room, we would likely have been thrown in jail for crossing police lines.

Weeks later, and prior to his trial, the paper heard that Westgate was to be transferred to a jail on York Avenue, a block over from the law courts on Broadway. I was assigned to cover his arrival there. A policeman came up to me and said in an emphatic manner, “No photographs”. He didn’t know I was stone deaf to a demand like that. It was dark and I mingled in the crowd that was assembling. When Westgate finally arrived in a paddy wagon, I grabbed a shot. I spotted reporter Shirley Scott and handed her the film holder and inserted a fresh one in the Speed Graphic. The cop must have seen me as a minute later he grabbed my arm and told me I was under arrest. He didn’t demand the film. He was walking me off, perhaps to the same jail cell where they would be holding Westgate when another officer came along. He may have been a sergeant, or even the chief, as he told the cop to let me go, saying they knew where to find me. The picture made the paper the next day and I never heard anything further about the arrest.