The Name Changes but the History Remains

With the recent renovations of Ivor Wynne Stadium, now Tim Hortons Field, it is the perfect time to look back at the 80+ years of historic and cultural importance the stadium has brought to the Hamilton community.

Opening in 1930 as the Civic Stadium, Ivor Wynne was built for the British Empire Games (Canada’s first major international athletic event) with a seating capacity of only 2,000. With major events in 1959 (seating expanded to 15,000), 1961 (Hamilton Tiger Cats hosted Buffalo Bills of the American Football League winning 38-21 and claiming the only victory of a Canadian team in any of the CFL-AFL exhibition games), 1970 (the stadium was named after Ivor Wynne for his work with McMaster University and the City of Hamilton), leading up to the 1972 Grey Cup (seating expanded to approximately 30,000, many considered it the best stadium in the league with the largest capacity), 1976 (artificial turf and colour scoreboard installed), 1991 (new Astro Turf installed), 1992 (stadium painted multiple colours to represent the variety of colours used by teams in the CFL, the north part of the stadium was the only exception having the Canadian flag painted for Canada’s 125th birthday) and leading up to the 1996 Grey Cup (skyboxes and temporary bleachers added to boost seating to 40,000) a lot has been done over the 80+ years since being built. 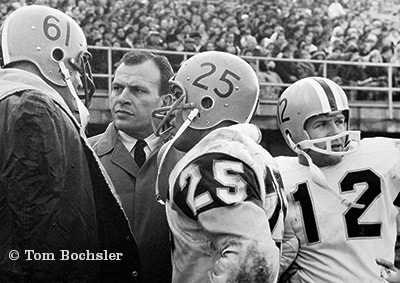 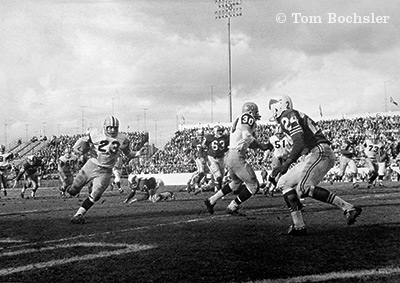 Tom Bochsler began photographing the Hamilton Tiger-Cats in the early 1950’s when he was in his twenties and had all the enthusiasm of a young guy in a new career. Tom’s best friend in the Tiger-Cat’s organization was Team Manager Len Back. Len was in complete control of everything from players to publicity, that’s where Tom came in. He covered all the home games and a couple of Grey Cups along with the press photographers and our Speed Graphics Camera.

In 1953, Tom became part of the half time show. He drove his 1927 Model T Ford into the middle of the playing field, loaded with a dozen clowns who did their antics then drove off and home up the mountain in low gear.

The annual team picture had to be made at the end of a less than stellar season, so just before the game Tom arranged a team grouping at the East side of the South stands. The team was lined up with the front row seated but it seemed too wide to him. Tom looked behind the group and commandeered a picnic type table and asked four players to climb on board. Standing behind the camera he made the first shot, he began to focus for a second shot and noticed the 4 players slowly disappearing. The table had collapsed and luckily no one was hurt. 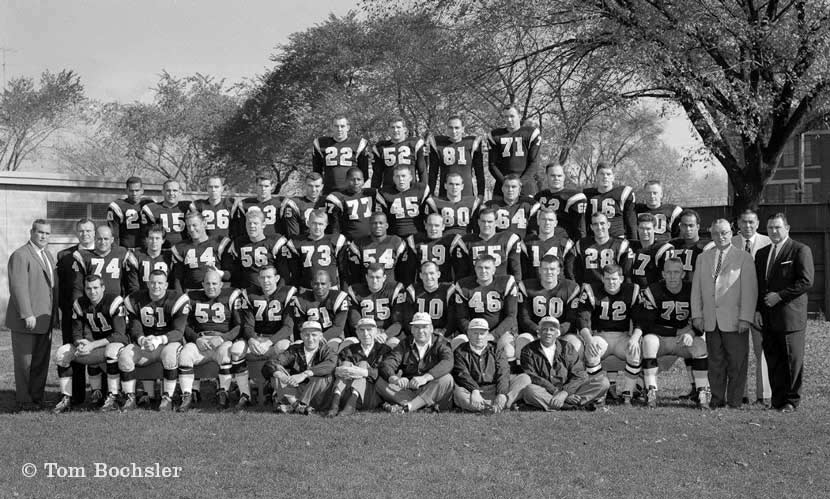 The new Tim Hortons Field will feature new individual seating for fans with the widest legroom among comparable facilities in Canada. The capacity for Tiger-Cats games will be approximately 24,000 with expandable capacity up to 40,000 for major events.

Along with the improved stands, the new Pioneer Endzone will be a place for all TigerTown fans to meet with vendors and one of the largest circular bars in Canada. Fans will experience an entirely new visual and audio experience with a new videoboard, high-definition televisions throughout the stadium and a new sound system.

Up until its current renovations, Ivor Wynne was one of the few stadiums of its kind in North America bringing historical and cultural significance to the Hamilton region and surrounding area. All that’s needed now is some old fashion football entertainment in front of the die-hard Tiger-Cat fans.

Photography by Tom Bochsler, Author of Photobiography “The Art of Industry”